STEM In PreK: Using Cat In The Hat Media Resources Children learn about the world from their observations, experiences, and from the answers they receive from others. They ask questions, form hypotheses, and conduct experiments to determine if they are correct—often with messy results. They learn about how water flows, about weather patterns, and about plant growth through play and experience. As the adults in their lives, we can support and extend these insights by helping them in their quest for more information about how the world works.

Research on Cat in the Hat Resources The Cat in the Hat Knows a Lot About That! (Cat in the Hat) media resources were developed by the Public Broadcasting Service (PBS) and Corporation for Public Broadcasting (CPB), based on the popular book series by Dr. Seuss Enterprises. These resources were developed with the purpose of supporting children’s early science and engineering knowledge and practices. The third season of the Cat in the Hat television show focuses on the topics of physical science, and engineering content, practices, and vocabulary. Through the engaging narratives and interactive experiences, the Cat in the Hat videos, games, apps, and hands-on activities leverage children’s natural curiosity about the world by encouraging them to ask questions about how things work, make observations, and design solutions to problems.

For this study, our research team at EDC’s Center for Technology and SRI International examined the impacts of exposure to the Cat in the Hat media resources. Such measured impacts include how well children understand concepts such as the role of strength and length in the stability of a bridge, how texture and friction relate to how easy it is to go down a slide, and how to sort objects by different physical characteristics. These abilities relate to children’s understanding of the physical world—specifically the types of activities 4- and 5-year-old children typically engage in through play and exploration. In the study, each child was provided a tablet to play with at home for eight weeks. After these eight weeks, our research team found:

Young children consume a lot of media (Rideout, 2017). Programming such as PBSKIDS’ offerings including The Cat in the Hat Knows A Lot About That!, Sesame Street, and Daniel Tiger are examples of media that can teach children about reading, math, science, and social-emotional skills while entertaining them (Kearney & Levine, 2019; Kirkorian, Wartella & Anderson, 2008; Mares & Woodward, 2012; Rasmussen, et al., 2016). Furthermore, research suggests that when adults co-engage with children while watching educational media by pointing out and asking questions about what’s happening, children can learn even more (Anderson & Hanson, 2017; Strouse et al., 2013).

Our study results show that children can transfer this learning into offline contexts, as evidenced by our child participants’ performance on our real-world, hands-on activities after engaging with the digital resources. Although we studied these resources in home contexts, it is worth considering how to leverage the learning opportunities high-quality educational media can provide in the classroom as well.

Ideas and Tips to Build on These Media Experiences: 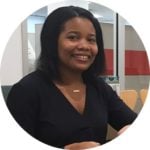 Tiffany Maxon, Ed.M., is an Education Researcher at Education Development Center’s Center for Children and Technology. Her research focuses primarily on informal learning environments, digital and real-world, that support increased accessibility to fundamental education for young learners. She is particularly interested in equitable access to education for low-income families and how media—videos, games, apps, etc.—can help close existing gaps. Tiffany is a 2019-2020 CADRE Fellow and holds a Master of Education in Human Development and Psychology from the Harvard Graduate School of Education. Elisa Garcia, Ph.D., is an Education Researcher at SRI International, where she works on a variety of research and evaluation projects studying preschool and elementary students. Her research primarily focuses on how factors in the classroom and at-home can promote positive academic and social-emotional outcomes for young children, particularly among diverse populations such as dual language learners. Dr. Garcia earned her Ph.D. in developmental and psychological science from Stanford University, where she was an IES predoctoral training fellow in quantitative education policy.