Twenty years ago, Geoffrey A. Nagle sat in a Guatemalan orphanage surrounded by excited young children, reading them bedtime stories in his broken Spanish.

The experience was a revelation for Nagle. “I would close my eyes at night and think, ‘I’m the richest guy in the world.’ The kids were so happy when I read to them,” he says. “I knew I wanted to help these children — and all children — but I needed to figure out how to do that.”

In January 2014, Nagle’s search led him to Erikson, where he succeeded Samuel J. Meisels as president. In the intervening years, Nagle had surefootedly made his way from volunteering in Guatemala to being a recognized leader in early childhood policy and research. His path leading to that orphanage, however, was anything but straight.

Nagle grew up on the East Coast: born in New York City, raised in Connecticut, and studied at Duke University in North Carolina. He was driven by a desire to help those overlooked and underserved by society. Drawn to the promise of social change through mass media, Nagle studied political science with a minor in film and video studies at Duke. After graduating, he headed to the opposite U.S. coast to work in the film industry in Los Angeles. His career steadily progressed, and he ultimately became a literary agent representing screenwriters and film directors.

After five years in the film industry, however, he realized that he wasn’t making the difference he wanted. He quit his job and traveled throughout Central and South America, taking on volunteer positions with orphaned and sick children.

“I quickly saw that everyone had a big heart and was trying to help the kids, but no one really knew what the kids needed,” says Nagle. His drive to create social change had found its focus: helping young children, just like the ones he read bedtime stories to in Guatemala. “I saw it as a two-part challenge: understanding how best to support children, beginning with the most vulnerable, and then creating systems and policies based on this knowledge.”

Nagle returned to the U.S. for a dual degree in public health and social work at Tulane University in New Orleans. Subsequently, he earned a doctorate in mental health policy research at Tulane while working for the Louisiana Office of Public Health.

“At the Office of Public Health, I was working with world-renowned experts to integrate infant mental health into state public health programs, but it wasn’t enough,” said Nagle. “We needed a research, training, and policy center in infant mental health to really make a difference.”

With that, the Tulane Institute of Infant and Early Childhood Mental Health was born, with Nagle as the founding director and Dr. Charles H. Zeanah, Jr., as the executive director.

During his 13 years as director, Nagle worked closely with Louisiana government leaders to strengthen the state’s early childhood system and expand high-quality early care and education. Perhaps most importantly, due to the work of the Institute and many others in the early childhood community, Louisiana for the first time recognized that children under five years old could have mental health issues and began providing the training and services needed to support the healthy social-emotional development of children and their families.

“Geoff has great vision and an ability to make things happen,” says Zeanah. “He is widely admired throughout Louisiana as someone with great ideas, passion about children and families, boundless energy, and creative approaches to challenges.”

While at the Institute, Nagle served on numerous advisory groups and boards including the Governor’s Children’s Cabinet Advisory Board (LA), Institute of Mental Hygiene board, and Louisiana Children’s Museum board. He has been recognized a number of times for his work, including receiving the Commissioner’s Award for Child Abuse Prevention from the U.S. Department of Health and Human Services, and being named a Louisiana Early Childhood Champion by the Louisiana Association for the Education of Young Children.

An opportunity at Erikson

[img_caption src=”https://www.erikson.edu/wp-content/uploads/Nagle-family-175×150.jpg” align=”right” caption=”Nagle and his family” alt=”Nagle and his family”]In 2013, Erikson’s presidential search committee, under the leadership of Trustee Michelle L. Collins, came knocking on Nagle’s door, and he was immediately intrigued.

“I saw Erikson as a chance to take the work I’d been doing in Louisiana to the national level,” he says. “But now that I’m here, I realize that I completely underestimated the size and scope of the opportunity. Erikson touches nearly every aspect of early childhood through its academic, social service, and clinical programs.”

In the first months of his presidency, Nagle has focused on deepening his understanding of Erikson’s many programs and meeting faculty, staff, students, trustees, and friends of Erikson. In the next year, he anticipates launching an Institute-wide strategic planning process, which will include working with faculty, staff, and trustees to determine how to strengthen Erikson’s national reach and influence.

“Erikson plays a large role in shaping how our country supports young children,” says Nagle. “Now’s the time to build on that and bring our unique focus on child development to even more families, professionals, policy makers, and leaders.”

A leader in the field

Collins and the search committee considered more than 250 early childhood leaders from around the country before recommending Nagle’s appointment.

“First and foremost, we were excited about Geoff’s passion for making the lives of children and families better, as it is obviously a deeply shared value at Erikson,” says Collins, vice chair of the Board of Trustees and chair of the search committee. “We were also drawn to Geoff because of his demonstrated ability to bring different types of people together to work toward a common goal, his skill at bringing complex and disparate information together to form a cohesive and understandable strategy, his keen intellect, straightforward and honest nature, and problem-solving ability.

“We had a hard time talking to anybody else after we met Geoff!”

Likewise, Phyllis Glink, executive director of The Irving Harris Foundation, highly recommended Nagle. The Foundation has funded his work for many years. “I have had the great fortune to see firsthand the impact he was able to have on Louisiana’s policies and systems serving young children and families,” says Glink. “His breadth of professional experience and passion for early education and children and families’ mental health make him the right person to lead Erikson into its next decade of growth.”

Zeanah of Tulane’s Institute of Infant and Early Childhood Mental Health concurs, saying, “I see great things ahead for Erikson under Geoff’s leadership.” 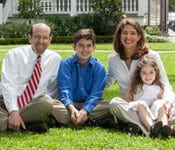