Every Friday morning, students from kindergarten to sixth grade gather in the Erie Elementary Charter School gym and, class by class, perform a cheer boasting of their commitment to learning.

Erie is a bilingual charter school predominantly serving Latino students in Chicago’s Humboldt Park neighborhood. The kindergarteners call themselves “children of Loyola,” because every classroom at Erie is named after a different university — a nod to the school’s goal of putting all students on the path to higher education.

“The commitment to graduating college-bound, bilingual, biliterate, and bicultural students is held by everyone, the teachers, the administration, the board,” says Pryor. “Everyone is on the same page.”

Erie, which partners with Erikson’s New Schools Project [Editor’s note: now Language and Literacy Partners], is a model of bilingual education. However, there is no school system-wide commitment to high-quality biliteracy. Erikson seeks to change this by developing policies, practices, and teacher preparation programs to help meet these students’ unique needs.

In Illinois, nearly 8 percent of students are dual language learners (DLL), learning a home language and English simultaneously. The default program for educating them is a transitional bilingual program, which is designed to make non-English-speaking students proficient in English by third grade, when they first take the ISAT, or Illinois Standard Achievement Test. In this approach, the student’s native language is not supported beyond the transitional period.

In comparison, Erie offers two program options, both with the goal of educating bilingual children: dual language and general education in English with a daily period of Spanish. Pryor’s kindergarten class is in the dual language program, an immersive approach in which her students spend 80 percent of their day speaking Spanish. When the students move to second grade, the Spanish to English ratio will go to 70/30, and in fourth grade, 60/40. When they reach fifth grade, the ratio will be 50/50 and remain so for all additional grade levels.

After children are accepted into the charter school by lottery, their parents voice their preference between the two program options. Regardless of which track is selected, Erie’s administration and teachers are committed to fostering positive, enthusiastic attitudes about learning and encouraging parental involvement, says Pryor.

“There’s a lot of misinformation out there,” she says. “People think that if students don’t learn English by preschool, then they never will. Or they think that it’s too confusing to learn two languages at once.

“The biggest thing teachers and administrators need to understand is the better a child learns his first language, the better he’ll learn his second language.”

Children are often rushed into learning English in the classroom, according to Meléndez, and parents are sometimes encouraged by teachers to speak English at home — even when they themselves have a limited command of the language.

“This causes many problems. The children start picking up their parents’ limited use of English, which isn’t accepted at school, but much worse is that their limited vocabulary keeps conversations to superficial exchanges. Their ability to have rich discussions and express abstract ideas is greatly diminished — a huge loss at that age.”

Perhaps most damaging, children whose native language is not supported may lose their ability to speak it. For immigrants, this may disconnect them from their family and their culture. In a short time, children could find that they are unable to communicate with their grandparents or interact when they visit their native country. This also wastes students’ bilingualism, which is something many English-speaking students strive to gain in their education.

At Erikson, the Herr Research Center for Children and Social Policy is tackling this issue head on through a study of preschools in the Chicago Public Schools that serve dual language learners. Teachers and administrators from more than 150 schools have completed surveys on how their schools serve dual language learners and the challenges the schools face. Erikson researchers also visited seven schools to observe classroom practices in action. The two-year study, which is funded by the Robert R. McCormick Foundation, will result in a comprehensive and practical set of policy recommendations related to issues including assessment, teacher preparation, and family-school engagement.

“This is our first chance to find out what is actually happening in Chicago’s classrooms,” says Center director Jana Fleming. “It’s an important step in helping CPS understand how they’re working with dual language learners and to adjust to better serve these students in the future.” 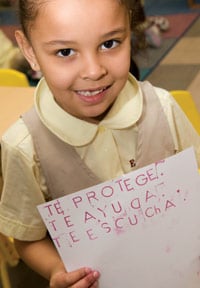 Erikson’s policy work and research are not the only ways the Institute improves the education of dual language learners. Erikson launched its Bilingual/ESL Certificate Program in 2002 and a specialization within the Master of Science in Early Childhood Education in 2003. These programs reflect one of Erikson’s founding tenets: children should always be viewed in the context of their culture and families.

Erikson challenges all of its alumni to share what they know about educating dual language learners with their colleagues and with families. “We rely on our graduates not only to be great teachers but to be leaders as well,” says Meléndez.

Erikson alumni are working in schools throughout the Chicago area to improve the education of dual language learners. Saskia Rombouts, BESL ’07, is building the Academy for Global Citizenship’s first dual language program. The Academy is a Chicago Public School in the Archer Heights neighborhood. After working in transitional bilingual programs in New York and Illinois, Rombouts is critical of the transitional bilingual approach’s implicit goal of monolingualism.

“It basically uses the student’s native language as a tool to help them learn English and then abandons it.”

She also expressed concern about some schools’ inconsistent — or even negative — teaching practices and attitudes toward students’ home language and culture, which she thinks result from the transitional bilingual approach.

“I was in a school where I saw staff yell at parents, because they couldn’t speak English,” says Rombouts. “But mostly I saw that schools just weren’t thinking about it or were ignoring it.”

In contrast, Rombouts hosts parent workshops at the Academy for Global Citizenship to explain the dual language program and the research that supports its methodology. She also meets with families individually to discuss the program’s process and benefits.

Dawn Hursh, BESL ’11, graduated from Erikson’s certificate program and now teaches kindergarten in the Chicago suburb of Bloomingdale, where 25% of students are dual language learners. They speak 22 different languages.

“I’m always on my soapbox about dual language learners,” she admits, laughing. She recounts debating a teacher who had asked her students to count to 20. When one girl recited her numbers in Spanish, the teacher marked the response as incorrect.

“Later, I asked her, ‘What’s the point of the question? Were you testing her ability to count or speak English?’”

Hursh helped the teacher see that she was ignoring the knowledge the child did have. Still, Hursh understands that teacher’s perspective.

“Before coming to Erikson, I would have thought the same thing: I have to get these children speaking English. Now, I’m confident that they’ll pick it up. In the meantime, I want to support them in what they are able to do.”

Meléndez agrees with this balanced perspective. “Of course, dual language learners need to learn English if they are to succeed in school and life, but the acquisition of their second language does not have to mean the loss of their first.” 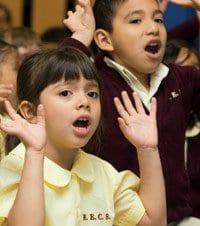